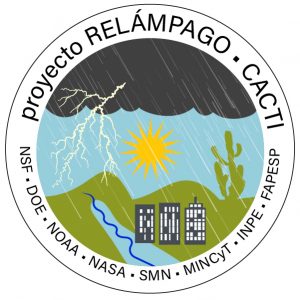 RELAMPAGO is a recently-funded (by many organizations in both the U.S. and South America) field campaign to observe and study convective storms in the lee of the Andes Mountains in central Argentina, South America, that are poorly represented by weather and climate models. These thunderstorms have been known to cause high impact weather (tornadoes, large hail, damaging straight-line wind gusts, and flash flooding) and are the most intense (tallest, widest, most electrically-active) on the planet according to satellite proxies. The field campaign will run for 45 days from 1 November – 15 December 2018, occurring concurrently with a 9-month field campaign funded by the Department of Energy called “CACTI”. The specific goals of the field campaign pertinent to our research group include, but are not limited to:

2) Develop an integrated understanding of storm-scale, mesoscale, and microscale dynamics and processes from initiation through upscale convective growth.

4) Compare/contrast convection in the different Argentinian regions and analogous regions in the United States.

The platforms for the field campaign include, but are not limited to: Doppler-on-Wheels (DOW) radars, NCAR S-PolKa, Mesonets, Portable Weather Stations (PODS), and fixed and mobile rawinsonde systems. 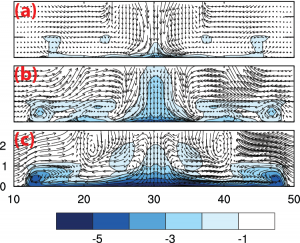 Pools of cold air form beneath precipitating convective clouds when the precipitation melts and evaporates. These surface cold pools exert strong controls on the initiation and characteristics of subsequent convection, and thereby on the fundamental convective dynamics and thermodynamics. More broadly, cold pools impact the radiative forcing of convective clouds, modulate their role in the water cycle, and influence their ability to process atmospheric constituents.

However, there still remain significant gaps in the knowledge of precisely how cold pools are coupled to the cloud macro-scale and micro-scale, as well as to the larger-scale environment, which includes the role of the cold pool as a mechanism for upscale feedback. Until these knowledge gaps are closed, a fully informed assessment of the accurate representation of cold pools in weather and climate models will not be attainable.

We will use a combination of highly complementary data analyses and numerical model experimentation to address the influences of cumulus entrainment, wind shear, atmospheric stability, microphysical processes, and land surface on: (i) cold pool development and intensity, (ii) the role of the cold pool as an upscale feedback mechanism, and (iii) the characteristics of the cold-pool triggered convection. Our key experimental tools are a cloud-resolving model (CRM), and the Weather Research and Forecasting (WRF) model, which is an ASR-supported modeling platform that will be used here for real-data simulations at convection-permitting resolutions. Our data source is the ARM-supported project Mid-latitude Continental Convective Clouds Experiment (MC3E). MC3E observations including those from vertically pointing cloud radars and profilers alongside scanning C-, X-, and S-band radars, aircraft in situ probes, and surface disdrometers will be used to characterize the evolution of cloud systems. High temporal frequency sounding arrays as well as Oklahoma Mesonet data will be used to characterize cloud system forcing and cold pool properties.

The synthesis of the CRM-modeling and data-analysis results will provide us with the means to evaluate cold-pool representation in convection-permitting model simulations of MC3E cases. Thus, the proposed work will culminate in the development of a conceptual framework for improving the fidelity of convective cold pools and subsequent convective triggering in convection-permitting configurations, which are rapidly becoming the configuration of choice in weather and climate applications. The proposed work will also provide timely information for developers and early users of global convection-permitting models, which are increasing in applicability at a rapid pace.

The Mesoscale Predictability EXperiment (MPEX) was a field campaign conducted 15 May through 15 June 2013 within the Great Plains region of the United States. MPEX had two complementary research foci:

Focus 2: The upscaling effects of isolated deep-convective storms on their environment, and the feedback of these effects to the convective-scale dynamics and predictability.